Set in New York City during the holiday season, the limited series Dash & Lily features charming performances by Austin Abrams as cynical Dash and Midori Francis as sunny Lily. The teenage title characters trade messages and dares in a red notebook they pass back and forth around the city. According to Linda Holmes of NPR’s Pop Culture Happy Hour, the series has “the sparkle and the swoon that a lot of holiday films lack.” The series is adapted from Rachel Cohn and David Levithan’s novel of the same name.

This event did not include a screening. Dash & Lily may be streamed in advance on Netflix. 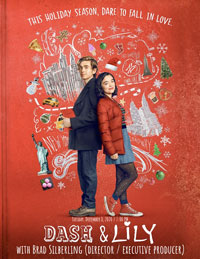 Brad Silberling is a film and television director, producer, and writer. He is currently the Director and Executive Producer of the CW’s series Charmed and Dynasty. As a director, Silberling’s first feature film credit, for producer Steven Spielberg, was the family classic Casper (1995). His other directing credits include the box-office hit City of Angels (1998), starring Meg Ryan and Nicolas Cage, and the Academy Award-winning box-office hit Lemony Snicket’s A Series of Unfortunate Events (2004), starring Jim Carrey and Meryl Streep. He served as Director, Producer, and Writer for the critically acclaimed Moonlight Mile (2002), starring Dustin Hoffman, Susan Sarandon, Jake Gyllenhall and Holly Hunter; the critically acclaimed independent feature 10 Items or Less (2006), starring Morgan Freeman and Paz Vega; Land of the Lost (2009) starring Will Ferrell and Danny McBride; and An Ordinary Man (2017), starring Ben Kingsley.

His extensive television directing credits include work on numerous Steven Bochco series including NYPD Blue and L.A. Law. More recently, he has been the Director and Executive Producer of The CW’s Reign, Jane the Virgin, Dynasty, and Charmed, as well as NBC’s Heartbreaker.

Silberling is a graduate of the UCLA School of Theater, Film and Television where he earned his master’s degree in production. He received his bachelor’s degree in English from UC Santa Barbara. He and his wife, actress Amy Brenneman, live in Los Angeles with their two children.

Emily Zinn is the Associate Director of the Carsey-Wolf Center. She earned her PhD from the University of Pennsylvania in English Literature, with an emphasis in Gender and Sexuality Studies. Her research interests include contemporary British and American literature, the role of food in literature, and fairy tales. She currently serves as a lecturer in UCSB’s English department. Previous events she has moderated for the Carsey-Wolf Center include discussions of Knock Down the House, The Handmaid’s Tale, and Deadwood.