You ever hear the one about the cop, the blonde, the psycho, and the mafia princess? Birds Of Prey (And the Fantabulous Emancipation of One Harley Quinn) is a twisted tale told by Harley herself, as only Harley can tell it. When one of Gotham’s most sinister villains, Roman Sionis, and his sadistic right-hand, Zsasz, put a target on a young girl named Cass, the city’s wicked underbelly is turned upside down looking for her. Harley, Huntress, Canary, and Renee Montoya’s paths collide and the unlikely foursome has no choice but to team up to take Roman down.

Script to Screen was delighted to welcome screenwriter/co-producer Christina Hodson for a virtual Q&A. The conversation was moderated by Pollock Theater Director Matt Ryan.

This event will not include a film screening.  Birds Of Prey (And the Fantabulous Emancipation of One Harley Quinn) can be streamed in advance on Amazon Prime, Apple TV, Google Play, HBO Max, Vudu, and Youtube. 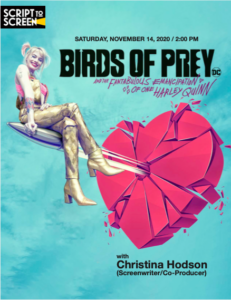 Christina Hodson first transitioned from development executive to screenwriter in 2012. Her first three spec scripts were featured on the Black List three years in a row. The last of these, The Eden Project, was a sci-fi action script that sold to Sony in a bidding war. This development led to Christina joining the Transformers writers’ room for Paramount in 2015. Based on the pitch she conceived in that room, Christina wrote the screenplay for Bumblebee (2018), which starred Hailee Steinfeld and was directed by Travis Knight. For Warner Bros and DC Comics, Christina wrote and co-produced Birds of Prey (And the Fantabulous Emancipation of One Harley Quinn), which was released in February 2020. She is currently writing both Batgirl and The Flash movies, the latter of which will be directed by Andy Muschietti and is due for release in 2022. Most recently, Christina signed on to write a new Pirates of the Caribbean film for Disney, which has Margot Robbie attached to star.

In addition to writing, Christina also produces films through her company, Hodson Exports, which she runs with executive Morgan Howell. In 2019, Hodson Exports teamed up with Margot Robbie’s LuckyChap Entertainment to launch the Lucky Exports Pitch Program. The initiative was designed to encourage studios to hire more female-identifying writers to write action-centric movies. Six applicants were selected to join a month-long writers room with each writer working to develop her own original feature pitch. Guest speakers included Chad Stahelski, Chris Morgan, Walter Hamada and Sue Kroll.

This event is sponsored by the Carsey-Wolf Center, the Department of Film & Media Studies, and the Scott Frank Fund for Screenwriting

The Utility of Oral Histories: The case of China

Love Technologies and its (Dis)Contents

The Invasion of Ukraine as a Turning Point

The Image of Disaster: Image-Events, Spaces of Suffering, and the Anthropo(S)cene