It is 1981. Beyond the borders of the isolated reservation community of Red Crow, the dead are coming back to life. The only ones who seem immune from the zombie plague are the reservation’s Mi’gmaq residents, who find themselves forced to ward off the ravenous, non-Native hordes. In this subversive and timely take on the zombie flick, writer/director Jeff Barnaby turns historical and popular narratives of contagion on their heads. With plenty of gumption and gore, Blood Quantum confronts the violent—and very much unfinished—history of Canadian settler-colonialism, striking at the disastrous legacy of colonial “blood quantum” laws.

Blood Quantum can be streamed on Shudder. The first 150 guests to register for this webinar will receive a link to an online screener for the film two days prior to the event. 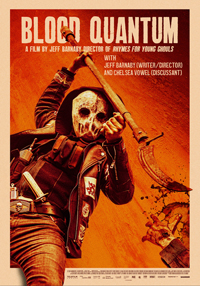 Chelsea Vowel is Métis from manitow-sâkahikan (Lac Ste. Anne) Alberta, residing in amiskwacîwâskahikan (Edmonton). Mother to six girls, she has a BEd, LLB, and MA. She is a Cree language instructor at the Faculty of Native studies at the University of Alberta. Chelsea is a public intellectual, writer, and educator whose work intersects language, gender, Métis self-determination, and resurgence. Author of Indigenous Writes: A Guide to First Nations, Métis & Inuit Issues in Canada, she and her co-host Molly Swain produce the Indigenous feminist sci-fi podcast Métis in Space, and co-founded the Métis in Space Land Trust. Chelsea blogs at apihtawikosisan.com and makes legendary bannock.

Tyler Morgenstern is a PhD candidate in the Department of Film & Media Studies at the University of California, Santa Barbara and a former Doctoral Fellow of the Social Sciences and Humanities Research Council of Canada. His research focuses primarily on the design, deployment, and use of information and communication technologies—particularly wireless ICTs—in colonial contexts. He is co-editor of Moving Images: Mediating Migration as Crisis (Transcript Verlag 2020), and his writing has appeared in Synoptique, The International Journal of Communication, and The Conversation.

This event is co-sponsored by the Carsey-Wolf Center, The American Indian and Indigenous Studies Collective Research Focus Group at the UCSB Interdisciplinary Humanities Center, the Las Maestras Center for Xicana[x] Indigenous Thought, Art and Social Practice, and the Walter H. Capps Center for the Study of Ethics, Religion and Public Life.

Throughout film history and across the globe, filmmakers have resisted social conventions and attracted the ire of governments and censorship boards. The Carsey-Wolf Center’s fall 2020 and winter 2021 screening series will showcase films considered politically, socially, culturally, and ideologically subversive. From mischievous caricatures to biting social critiques, the films in this series invite discussion of the efficacy of subversion and the historical contexts that have rendered these works subversive in the first place.

‘The Great Dictator’ Event Featured in The Daily Nexus

“Sorry to Bother You” Q&A Featured in UCSB Current