Co-writer/director Destin Daniel Cretton joined Pollock Theater Director Matt Ryan for a virtual conversation about this groundbreaking film. This event will not include a screening. Shang-Chi and The Legend of The Ten Rings may be viewed in theaters and will be available for streaming Disney Plus starting November 12, 2021. 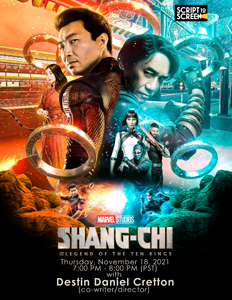 Maui-born Destin Daniel Cretton made his feature film debut with I Am Not a Hipster, which premiered at Sundance in 2012. He followed with Short Term 12, which won the Grand Jury Prize and Audience Award at the SXSW Film Festival in 2013, featuring early performances by Brie Larson, Lakeith Stanfield, Rami Malek, Kaitlyn Dever, and John Gallagher Jr. His third feature, an adaptation of the New York Times best-selling memoir The Glass Castle, starred Brie Larson, Woody Harrelson, and Naomi Watts and was released in 2016 by Lionsgate. Following this, Destin directed Just Mercy for Warner Bros, the adaptation of the New York Times bestselling memoir by civil rights attorney Bryan Stevenson. The film starred Michael B. Jordan, Jamie Foxx, and Brie Larson.

Matthew Ryan earned his MFA in Screenwriting from Loyola Marymount University in 2008. He has been the Pollock Theater Director since the theater opened in October 2010. He created and hosts the Script to Screen series, which has welcomed prestigious guests such as writer/director/producer Jordan Peele (Get Out), writer/director Damien Chazelle (Whiplash), screenwriters Emily V. Gordon and Kumail Nanjiani (The Big Sick), and writer/director/producer David Mandel, actor Tony Hale, and actress Julia Louis-Dreyfus (VEEP). Ryan oversees the Pollock Theater Internship, which offers industry-level experience in live multi-camera television production and event planning. TV shows produced by students through this program have generated 15.1 million online views on the UCTV cable station.