Adapted from the celebrated science-fiction novel by Frank Herbert, Dune follows the epic story of Paul Atreides (Timothée Chalamet), son of the noble family that governs Arrakis. This inhospitable desert planet is notorious for its monstrous sandworms and vast reserves of spice, the precious substance that awakens the senses to make interstellar travel possible and incites the bloody conflict between House Atreides and House Harkonnen, the brutal empire that seeks to overthrow the rule of Duke Leto Atreides (Oscar Isaac). As the machinations of the cruel Baron Harkonnen (Stellan Skarsgård) unfold on Arrakis, Paul stumbles into the mysterious world of the native Fremen people after seeing visions of a mysterious woman (Zendaya). Seeking to protect his family and the planet, Paul finds aid from his mother Lady Jessica (Rebecca Ferguson), who has ambitions for her son with wide-reaching implications far beyond his understanding.

Oscar-winning screenwriter and UCSB alumnus Eric Roth will join Pollock Theater Director Matt Ryan for a virtual discussion of Dune. This event will not include a screening. Dune can be screened on Amazon Prime.

This virtual event will take place via Zoom. The event is free but prior registration is required. Registration will close one hour before the event. 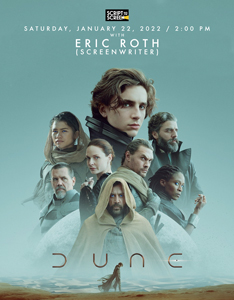 Academy Award® winner Eric Roth attended UCSB, Columbia University, and UCLA. His first produced screenplay was Robert Mulligan’s The Nickel Ride, which premiered at the 1975 Cannes Film Festival. Roth’s other writing credits include The Drowning Pool, Suspect, and Mr. Jones. He wrote the Academy Award Best Picture winner Forrest Gump, for which he received Oscar and the Writers Guild awards for Best Adapted Screenplay. His other films include The Horse Whisperer, The Insider, Ali, Munich, The Good Shepherd, The Curious Case of Benjamin Button, Extremely Loud and Incredibly Close, and A Star is Born.

In television, Roth is the executive producer of five-time Emmy Award nominated Best Drama House of Cards, Berlin Station, and the 2018 Emmy Award-nominated Outstanding Limited Series The Alienist. His most recent film work includes Dune, directed by Denis Villeneuve, and Killers of the Flower Moon, directed by Martin Scorsese. He produced David Fincher’s Mank, which was nominated in 2021 for Best Picture. He is writing the adapted screenplay from the Jo Nesbo short story London, directed by Ben Stiller and starring Oscar Isaac, as well as a biopic for Cher and a love story starring Chris Hemsworth. Mr. Roth has been nominated for six Academy Awards, three British Academy of Film Awards, three Critics Choice Awards, and five Writer’s Guild of America Awards, including the prestigious Laurel Award for Screen, which is the Writers Guild of America West’s lifetime achievement award.

This event is sponsored by the Carsey-Wolf Center and the Department of Film & Media Studies.