Veneno tells the epic story of Cristina Ortiz Rodríguez, or “La Veneno,” a transgender icon and media personality who rocketed to fame in mid-1990s Spain following an appearance on a popular late night talk show. Across eight episodes, Veneno flips back and forth across decades, detailing her complicated childhood in the 1960s, her later renown as a sex worker in Madrid, her rise to public fame on television, and her subsequent years relaying her life story to her wide-eyed teenage confidant and eventual biographer Valeria Vegas (Lola Rodríguez). Three cast members — Jedet, Daniela Santiago, and Isabel Torres — lovingly bring Veneno to life, conveying the considerable impact that she had on the queer community, transgender fans, sex workers, and those who identified with her internal and external struggles waged in the public eye. Veneno’s emotionally stirring narrative, told in a variety of striking visual styles and tones, pays tribute to an iconic life and to the chosen families that helped her discover her power.

Veneno star Daniela Santiago joined Jennifer Tyburczy (Feminist Studies, UCSB) in a virtual discussion of the show. The conversation focused on Episode 5 “Cristina through the Looking Glass” and Episode 6 “One of Ours.” 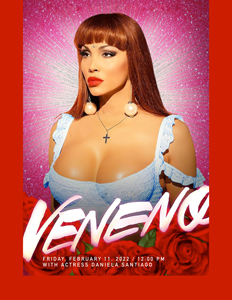 Daniela Santiago was working as a make-up artist when she answered a casting call for the 2020 series Veneno and unexpectedly found stardom. Santiago has garnered much critical acclaim for her work in the principal role of Cristina “La Veneno,” an ex-sex worker turned reality TV royalty. She recently won the coveted Premio Ondas award in Spain and a GLAAD Award in the United States. Since, she has gone onto work alongside Penélope Cruz in Pedro Almodóvar’s latest project Parallel Mothers, and also Atresplayer’s series ByAnaMilán.

Beyond acting, Santiago has broken through in the fashion industry, featuring in the main campaign for Roberto Cavalli. She has featured in notable publications such as Vogue, British GQ, PAPER Magazine, Candy Magazine, and V Magazine, among others. Her work, her story, and her advocacy for the trans community mark her as a pioneer for transgender representation in fashion and cinema. She will be releasing her autobiography at the end of the year.

Jennifer Tyburczy is an Associate Professor in the Department of Feminist Studies at UCSB. Her first book, Sex Museums: The Politics and Performance of Display (2016), won the 29th Lambda Literary Award for Best Book in LGBTQ Studies. She is currently finishing her second monograph, titled Queer Traffic: Sex, NAFTA, and the Performance of Free Trade.

Television has traditionally been understood through national frameworks, corresponding to national networks of television distribution. The Carsey-Wolf Center series “Global TV” explores the way some contemporary television programs and formats have become unmoored from their national contexts of production and distribution.  The series will spotlight a number of recent shows that showcase this phenomenon, including a French heist caper, a South African vigilante thriller, and a crime drama set at the epicenter of political and social change in twenties Berlin; each of these shows both transcends and is rooted in its national context and culture. The events in the series will examine how and why a particular program might travel and take hold with an international audience, addressing questions about the role of contemporary streaming services and global flows of creative labor.