Gather is an intimate portrait of the growing movement among Native Americans to reclaim their spiritual, political and cultural identities through food sovereignty, all while battling the trauma of centuries of genocide. Gather follows Nephi Craig, a chef from the White Mountain Apache Nation (Arizona) as he works to open an Indigenous café that doubles as a nutritional recovery clinic; Elsie Dubray, a young scientist from the Cheyenne River Sioux Nation (South Dakota) who conducts landmark studies on bison; and the Ancestral Guard, a group of environmental activists from the Yurok Nation (Northern California) working diligently to save the Klamath River. 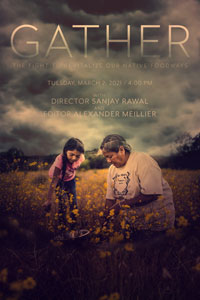 A James Beard Award-winning filmmaker, Sanjay is the director of Food Chains (2014, EP Eva Longoria, Eric Schlosser), which chronicles the battle of the Coalition of Immokalee Workers, a small group of Oaxacan and Chiapan indigenous farmworkers in Florida, against the largest agribusiness conglomerates in the world. The film was released theatrically in a number of countries and won numerous awards, including citations from the U.S. Conference of Mayors, the Clinton Global Initiative, and the White House. The film was also a winner (shared) of the 2016 BritDoc Impact award and several festival prizes.

Sanjay’s previous film, 3100: Run and Become (2018), has won several festival prizes. Following a robust U.S. theatrical release in 2018, 3100 will be opening in traditional theatrical engagements across Europe and Australia in 2020 and 2021.

Greg Johnson is Professor in the Department of Religious Studies at UCSB, where he is also director of the Walter H. Capps Center for the Study of Ethics, Religion, and Public Life. Johnson’s research focuses on the intersection of law and religion in contexts of indigenous struggles over burial protection, repatriation, and sacred land. His work has focused primarily on Hawaiian and Native American contexts but also on emerging forms of global indigeneity. Johnson’s publications include Sacred Claims: Repatriation and Living Tradition (UVA 2007), Handbook of Indigenous Religion(s) (co-edited with Siv Ellen Kraft, Brill 2017), Irreverence and the Sacred: Critical Studies in the History of Religions (co-edited with Hugh Urban, Oxford 2018), Indigenous Religion(s): Local Grounds and Global Networks (co-edited with Kraft, Tafjord, Alles, and Longkumer, Routledge forthcoming), and a working manuscript entitled Religion in the Moment: Tradition, Law, and Contemporary Indigeneity.

This event is sponsored by the Carsey-Wolf Center and the Walter H. Capps Center for the Study of Ethics, Religion, and Public Life.