Women of the Gulag (2019) tells the compelling stories of six female survivors of Soviet labor camps. While Solzhenitsyn’s classic Gulag Archipelago focuses on the experiences of the men caught in Stalin’s camps, Marianna Yarovskaya’s 2019 Oscar-shortlisted documentary captures the voices of women survivors, now in their eighties and nineties, as they go about their daily lives and reflect on their experiences. Their accounts range from the horrific to the uplifting. The film also juxtaposes the troubling resurgence of praise for Stalin with the fight to preserve and disseminate the memory of Soviet repression, terror, and displacement.

Director/producer Marianna Yarovskaya and author/producer Paul Gregory joined Alexandra Noi (History, UCSB) for a virtual discussion of this fascinating documentary. Two days before the event, registered participants will receive a screening link to view the film. 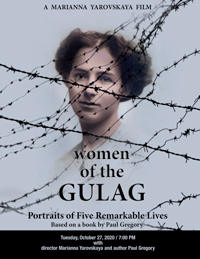 Marianna Yarovskaya is an award-winning Russian-American documentary filmmaker who is the director and producer of the 2018 Academy Award short-listed documentary film, Women of the Gulag. Her first film, Undesirables, won a Student Academy Award in 2001. Since then, she has worked on dozens of programs for Discovery Channel, National Geographic, History Channel, Greenpeace, Animal Planet as producer, executive producer, and senior editor. She also has credits on over 80 documentary films and TV programs, including research credits on two Academy Award-winning and one Academy-nominated feature film. She is a member of the Producers Guild of America (PGA).

Paul Gregory is a Research Fellow at the Hoover Institution at Stanford University. He is the author of Women of the Gulag: Five Remarkable Lives (Hoover) and Terror by Quota (Yale). He is the editor of the eight-volume History of Stalin’s Gulag (Rosspen). He has worked in the Hoover archives for over fifteen years. His archival research has formed the basis for more than eight books. Gregory is also a professor emeritus from the University of Houston.

Alexandra Noi is a PhD student in the Department of History at UCSB. She is interested in the comparative analysis of penal systems in China and the former Soviet Union, as well as in historical memory, commemoration practices, sites of conscience, and intergenerational trauma. She is a member of the UCSB Interdisciplinary Memory Research Group.