Though climate change is a fundamentally global phenomenon, nowhere are its effects more pronounced and observable than in the world’s polar regions. The documentary Frozen Obsession follows the 18-day, 2,000-mile Northwest Passage Project expedition through the stunningly beautiful and extreme Canadian Arctic, aboard the Swedish research icebreaker Oden. For centuries, sailors were obsessed with finding a path across the mostly frozen Arctic. Now, scientists are racing to understand a fast-warming Arctic, exploring how environmental changes currently unfolding in the polar regions will affect life on a planetary scale. With support from the National Science Foundation and additional support from the Heising-Simons Foundation, the innovative Northwest Passage Project (NPP) consists of a team of scientists, education professionals, a journalist, an Arctic scholar, and 23 graduate and undergraduate student science majors. 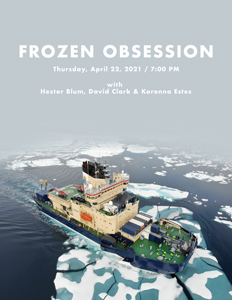 Hester Blum is Professor of English at Penn State University. Her most recent book, The News at the Ends of the Earth: The Print Culture of Polar Exploration, was published by Duke University Press in 2019. She is also the author of The View from the Masthead: Maritime Imagination and Antebellum American Sea Narratives (2008), which received the John Gardner Maritime Research award. Her edited volumes include a forthcoming edition of Herman Melville’s Moby-Dick for Oxford World’s Classics; the essay collection Turns of Event: Nineteenth-Century American Literary Studies in Motion (2016); special issues of Atlantic Studies (2013) and the Journal of Transnational American Studies (2019) on oceanic and archipelagic studies; and a scholarly edition of Horrors of Slavery (2008), William Ray’s 1808 Barbary captivity narrative. Blum contributes frequently to Avidly, a channel of the Los Angeles Review of Books. She participated in an Arctic climate change expedition in 2019 with the Northwest Passage Project, and was a 2019-2020 Guggenheim Fellow.

David Clark is an award-winning producer/director/writer who has been specializing in non-fiction motion picture and television programs in natural history, science and adventure for over 40 years. With a reputation for creating films with substantive, credible science content, Clark has been the Co-Principal Investigator on several National Science Foundation funded projects. He has produced/directed eight large-format IMAX 3D films that have grossed over $150M to date. Much of Clark’s work has been in the realm of natural history. Clark was the supervising producer for 20 episodes of The World of Audubon environmental series on Turner Broadcasting, and produced 7 programs about modern marine science for the Science of the Deep Science Channel series. He has also produced natural history films about humpback whales, grizzly bears, endangered Caribbean birds, and the wildlife of the Galapagos Islands.

Korenna Estes was an undergraduate student at California State University Channel Islands when she participated on the eighteen-day expedition through the Northwest Passage. She was a part of the microscopic communities research team and conducted a suite of onboard experiments to examine plankton habitats. Now, Korenna is a part of the Louis Stokes Alliances for Minority Participation (LSAMP) Bridge to Doctorate program at California State University – Fresno. She is pursuing her Biology Master’s degree and is studying Alzheimer’s disease using the model organism, Drosophila melanogaster. She is passionate about the sciences and hopes to continue to inspire all generations to be engaged in our surrounding environment and to be mindful how our daily actions may impact Earth.

Ian Kellett is an accomplished field producer, cinematographer, storyteller and performer. Working with National Geographic, BBC, WoodsHole Oceanographic Institution and Ocean X,  Ian produced dozens of expeditions connecting media to innovative ocean solutions. As a director of photography he lensed award-winning films including National Geographic’s Defender of the Wild and several globally-distributed TV series including Pacific Abyss and Oceans.  His lifelong passion is to create transformative experiences and stories that support thriving stewardship of aquatic systems.