In honor of National Disability Employment Awareness Month and the thirtieth anniversary of the passage of the Americans with Disabilities Act, the Carsey-Wolf Center and the UCSB Library are delighted to host a virtual discussion with the directors of Crip Camp: A Disability Revolution (2020).

In the early 1970s, teenagers with disabilities faced a future shaped by isolation, discrimination and institutionalization. Located in the Catskills, New York, ramshackle Camp Jened exploded those confines. Jened was the teens’ freewheeling utopia, a place where summertime sports, smoking, and make-out sessions awaited everyone; campers experienced liberation and full inclusion as  human beings. Their bonds endured as many migrated west to Berkeley, California, a hotbed of activism where friends from Camp Jened realized that disruption, civil disobedience, and political participation could change the future for millions. Crip Camp premiered at the 2020 Sundance Film Festival, where it was the winner of the Audience Award.

Co-directors and producers Jim LeBrecht and Nicole Newnham joined Hannah Garibaldi (Film and Media Studies, UCSB) for a virtual discussion of this fascinating documentary. ASL interpretation will be provided during the event. The film may be viewed in advance on Netflix.

Presented in conjunction with “Disability Activism at UCSB and Beyond,” a student-led event that will take place Wednesday, October 21 at 2:00 PM. 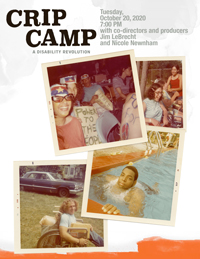 Jim LeBrecht has over 35 years of experience as a sound designer and mixer for film and theater, author, and disability rights activist. Jim began his career in theater, working as the resident sound designer at the Berkeley Repertory Theater for ten years. His film credits include ​The Island President​, ​The Waiting Room​, ​The Kill Team​ and ​Audry and Daisy​. A complete list of his film credits (over 145) can be viewed at ​IMDB​. Jim co-authored ​Sound and Music for the Theater: The Art and Technique of Design​. Now in its 4th edition, the book is used as a textbook all over the world. Jim’s work as an activist began in high school and continued at UC San Diego, where he helped found the Disabled Students Union. Jim is currently a board member of the Disability Education and Defense Fund, which works for the rights of the disabled through education, legislation, and litigation.

Nicole Newnham is an Emmy-winning documentary producer and director, Sundance Film Festival alumnus, and five-time Emmy-nominee. She has recently produced two virtual reality films with the Australian artist/director Lynette Wallworth: the breakthrough VR work ​Collisions​, which won the 2017 Emmy for Outstanding New Approaches to Documentary, and Awavena, featured this year at the World Economic Forum in Davos and at the 2017 Sundance Film Festival. Previously she co-directed ​The Revolutionary Optimists​, winner of the Sundance Hilton Sustainability Award. Nicole also instigated, co-produced and directed the acclaimed documentary ​The Rape of Europa​, about the Nazi war on European culture, which was nominated for a WGA award and shortlisted for the Academy Award. With Pulitzer-prize winning photographer Brian Lanker, she produced They Drew Fire,​ about the Combat Artists of WWII, and co-wrote the companion book, distributed by Harper Collins. A 1997 graduate of the Stanford Documentary Film Program, Nicole lives in Oakland with her husband Tom, and two sons, Finn and Blaine.

Hannah Garibaldi is a PhD student in the Film and Media Studies Department at the University of California, Santa Barbara. She received her Master’s degree in Film Studies from Chapman University with her thesis, “Chromatically Subverting the Production Code: Hollywood’s Colorful Weapon in the 1940s.” Her research interests include the intersection of Hollywood censorship with color filmmaking in the 1930s-1950s, the establishment of accessibility standards in current cinematic exhibition, and the influence of physical illness, injury, and disability upon historical Hollywood film productions.

This event is sponsored by the Carsey-Wolf Center, the UCSB Library, the Disabled Students Program, Graduate Division, the Resource Center for Gender and Sexual Diversity (RCGSD), and the UCSB Disability Studies Initiative.