The 2012 documentary Char…The No-Man’s Island (Moddhikhane Char) tells the story of Rubel, a fourteen-year-old boy who lives with his family on the fragile island of Char. Located in the river Ganga, which forms the boundary between India and Bangladesh, Char is heavily patrolled by border police from both nations. Rubel dreams of going to school in India, but instead works as a smuggler, selling rice across the international riverine border. Sourav Sarangi’s lyrical exploration of this complicated border region was the winner of numerous awards at international film festivals. 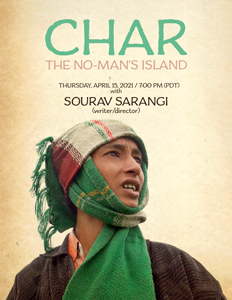 Sourav Sarangi is an award-winning filmmaker from India. His 1996 debut film Tusu Katha (The Tale of Tusu) is a lyrical observation of the lives of marginalized people and their culture in eastern India. His next film Bilal (2008) tells story of a small child living with his blind parents; it received a warm response worldwide in festivals, theaters and TV stations and won many awards. Widely broadcast around the world, his works have also been  released theatrically in Japan and Korea. Karbala Memoirs (2019), his latest documentary, was shot in Iraq. Currently he is working on a documentary on the Sundarbans, the world’s largest mangrove delta, which is facing devastation due to global warming.

Bhaskar Sarkar teaches in the Department of Film & Media Studies at UC Santa Barbara. His main research interests are Globalization and Media, Risk Media, the Global South, and Indian Cinema. He is currently working on two monographs, one on Bollywood and the other on media piracy.

Borders are at once physical and imaginary, embedded on the ground, imposed upon populations, and played out across the sea. The Carsey-Wolf Center’s spring 2021 public programming series explores borders, borderlands, and frontiers as they are cinematically, politically, technologically, and archivally mediated. The series engages with a range of borders: the US-Mexico border, an ICE detention center in Florida, the aqueous borders across which migrants journey to Europe, and the changeable border that separates India and Bangladesh. The series interrogates different geographical terrains and forms of crossing and detainment in an effort to encourage viewers to embark on an intellectual journey of their own. Through films and media strategies that themselves traverse the boundaries between narrative and documentary, this series explores the messy, evolutionary character of all borders, approaching them as places—both embodied and discursive—where new social relations are worked out, and where emerging struggles become legible.