Adapted from Michael Lewis’s 2010 nonfiction book of the same name, The Big Short (2015) dramatizes the relationship between the financial crisis and collapse of the United States housing bubble. It centers on characters played by Christian Bale, Steve Carell, Ryan Gosling and Brad Pitt, based on real figures who were working on Wall Street at the time of the collapse. The film uses unconventional techniques to explain financial instruments, with cameo appearances by stars who break the fourth wall to explain concepts such as subprime mortgages and collateralized debt obligations.

The Carsey-Wolf Center is delighted to welcome Academy Award-winning screenwriter Charles Randolph for a virtual Q&A with Matt Ryan, director of the Pollock Theater.

This event will not include a screening. The Big Short may be streamed in advance on Amazon Prime, Youtube, or Vudu. 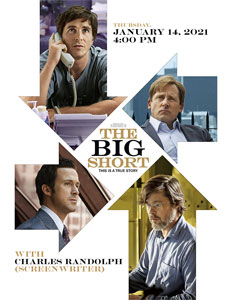 This event is sponsored by the Carsey-Wolf Center, the Department of Film & Media Studies and the Scott Frank Fund for Screenwriting.