Writer, director, and musician Boots Riley joined moderator Miguel Penabella (Film and Media Studies, UCSB) for a discussion of Sorry to Bother You and his musical career.

Sorry To Bother You can be streamed on Amazon Prime Video and Hulu. 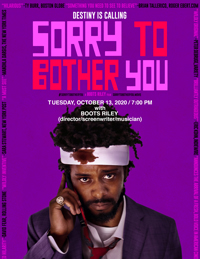 Boots Riley is a provocative and prolific poet, rapper, songwriter, producer, screenwriter, director, community organizer, and public speaker. Boots Riley wrote and directed Sorry to Bother You, a comedy fantasy sci-fi film, in his directorial debut. The film premiered at the 2018 Sundance Film Fest and opened to strong critical acclaim in theaters nationwide later in 2018. He is the lead vocalist of The Coup and Street Sweeper Social Club. Fervently dedicated to social change, Boots was deeply involved with the Occupy Oakland movement. He was one of the leaders of the activist group The Young Comrades. He is the author of the critically acclaimed Tell Homeland Security—We Are the Bomb.

Miguel Penabella is a PhD student in Film and Media Studies at the University of California, Santa Barbara. His research deploys the specter as a theoretical framework for examining historical revisionism and questions of national cinema in the Philippines. He is also interested in theorizations of cinematic temporality with regards to national identity, memory, spectatorship, and slowness, focusing specifically on Southeast Asian filmmakers. He is a member of the Media Fields Journal editorial collective.

This event is sponsored by the Carsey-Wolf Center and KCSB.