After faking his way into a job as a tutor for the wealthy Park family, Kim Ki-woo (Choi Woo-shik) begins looking for employment opportunities for his family members as well. Gradually, the affluent Park family and the street-smart Kim family become increasingly enmeshed in work and life. With its shrewd depiction of class conflict and darkly hilarious narrative, Bong Joon-ho’s Parasite (2019) met with enormous critical and commercial success.

Parasite can be streamed on Amazon Prime Video, Google Play, Hulu, and Vudu. 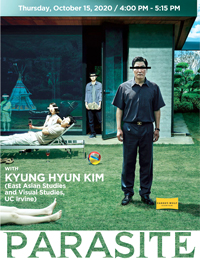 Click on the image above to view a slideshow of stills for today’s discussion.

Kyung Hyun Kim is a creative writer, a scholar, and a film producer.  He has worked with internationally-renowned film directors such as Lee Chang-dong and Marty Scorsese. Kim is author of The Remasculinization of Korean Cinema, Virtual Hallyu: Korean Cinema of the Global Era, Hegemonic Mimicry: Korean Popular Culture of Twenty-first Century, all of them published by Duke University Press, and a Korean-language novel entitled In Search of Lost G (Ireo beorin G-reul chajaso, 2014) about a Korean mother combing through the U.S. in search of her missing son during his junior year in a Massachusetts prep school.  He has coproduced two award-winning feature films: Never Forever (2007, Sundance Film Festival’s U.S. Main Competition) and The Housemaid (2010, Cannes Film Festival Main Competition), and his co-scripted film screenplay, The Origins of a Detective (Hyeongsa eui kiwon), won a cash prize (US$ 30,000) for being selected for the 2019 Best Film Development Project by the Korean Film Commission. His first theatre screenplay, Pan-Damn-It!, will be featured as a staged reading and directed by Jane Page (Drama, UC Irvine) in fall 2020.

Sowon S. Park teaches neurocognitive literary criticism, world literature, and European modernism in the English department at UCSB. She has worked as a journalist and TV presenter in Korea and blogs about K-Pop.