The unhinged joy and bitter angst of modern adolescence are confronted with honesty, clarity, and passion in Thirteen (2003). The story follows Tracy (Evan Rachel Wood) as she grows from a pig-tailed child, still playing with teddy bears and Barbie dolls, into a young woman navigating the hyper-sexualized pressure cooker of junior high. Here, she witnesses the power and hipness of Evie Zamora (Nikki Reed, co-writer of the script), widely known as “the hottest chick in school.” Ultra-popular, gorgeous, and bewitchingly snobby, Evie represents everything Tracy suddenly wants to be. 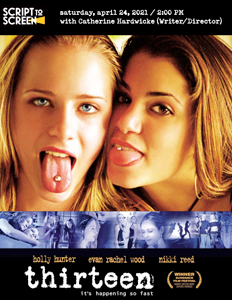 Catherine Hardwicke’s first film as a director was the critically-acclaimed Thirteen, which won numerous awards including the Director’s Award at Sundance, Golden Globe nominations for Holly Hunter and Evan Rachel Wood, and an Academy Award nomination for Holly Hunter. Hardwicke has since then become best known as the director of Twilight, which launched the blockbuster franchise and earned nearly $400 million at the global box office. Hardwicke’s other credits include Lords of Dogtown, Miss You Already, Red Riding Hood, and Miss Bala. For television, she has directed episodes of This Is Us, Eye Witness, Low Winter Sun, and Hell on Wheels. She previously worked as a production designer on films directed by Richard Linklater, David O. Russell, Cameron Crowe, and Lisa Cholodenko. She holds a Bachelor of Architecture from UT Austin, and did graduate work in animation at UCLA Film School. Most recently, Hardwicke directed and executive produced the 14 part Quibi series Don’t Look Deeper (starring Don Cheadle, Emily Mortimer and newcomer Helena Howard), which is set “fifteen minutes in the future.”

This event is sponsored by the Carsey-Wolf Center, and the Department of Film & Media Studies.

The Utility of Oral Histories: The case of China

Love Technologies and its (Dis)Contents

The Invasion of Ukraine as a Turning Point

The Image of Disaster: Image-Events, Spaces of Suffering, and the Anthropo(S)cene