At the height of McCarthyism, director Herbert J. Biberman—one of the infamous “Hollywood Ten”—became transfixed by the strike against the Empire Zinc Company, led by Mexican-American miners and their families in Grant County, New Mexico. Together with several other blacklisted filmmakers, Biberman decided to create a feature film based on the events, casting and working alongside local nuevomexicano community members. The neorealist Salt of the Earth (1954) was unsurprisingly labeled as subversive and denounced in the U.S. as communist propaganda. Lead actress Rosaura Revueltas was even deported to Mexico before filming had finished. Upon its release, the film was widely banned in the U.S. but did find success in Mexico and Europe. The film has since become a classic of both Chicano and feminist cinemas.

Gabriel Meléndez (Distinguished Professor at the University of New Mexico and author of Hidden Chicano Cinema: Film Dramas in the Borderlands) joined moderator Stephen Borunda (Film and Media Studies, UCSB) for a discussion this important film. Salt of the Earth is available for streaming on Amazon Prime, Kanopy, Pluto TV, and Tubi. 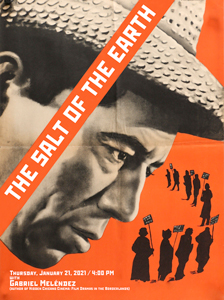 Gabriel Meléndez is the former Director of the Center for Regional Studies (CRS) at the University of New Mexico. CRS promotes the quest to identify and make available sources of knowledge about the USA-Mexico Borderlands, the Americas and Spain. Meléndez is a University Distinguished Professor and former chair of American Studies. He is a literary, social and cultural critic with research interests in ethnic and cultural representations in film and autobiography.

He is the author and editor of a number of books, among them: So All is Not Lost: The Poetics of Print in Nuevomexicano Communities, 1836-1958 (UNM, 1997), The Multicultural Southwest: A Reader (Arizona, 2001), Santa Fe Nativa: A Collection of Nuevomexicano Writing (UNM, 2010), Hidden Chicano Cinema: Film Dramas in the Borderlands (Rutgers University Press, 2013), and The Legend of Ponciano Gutiérrez and the Mountain Thieves (UNM 2013) an illustrated book for young readers. Meléndez’s most recent book, The Book of Archives/El Libro de los archivos moves his writing from the rigors of archival research onto the open tableland of creative and imaginative writing.

Meléndez was the recipient of a 2014-2015 Senior Teaching and Research Fulbright Fellowship. His Fulbright award extended academic exchanges between UNM and Eszterházy Károly College (EKC) in Eger, Hungary. His Fulbright project, “The Power of the Celluloid Curriculum,” worked to build critical awareness in his students concerning the inclusion and exclusion of ethnic minorities in American film.

Stephen Borunda is a Ph.D. student in Film and Media Studies at UCSB. He holds a B.A. in Political Science and History, and an M.S. in Education from The Johns Hopkins University. After his undergraduate studies, Stephen served as a teacher via Teach for America in Baltimore City. During his subsequent time in Santiago de Chile, he published writings in The Santiago Times; his reviews and articles have also been featured in Film Matters.

Some of his research interests include border cinema and media produced in the areas that comprised the frontiers (especially Nuevo México and Chile) of the former Monarquía Hispánica in las Américas, the nuclear age cinema of Nuevo México, environmental media studies, post-colonial media theory, Latin American/Latinx media and cinema, media and cinema in the Southern Cone, media and pedagogy, political culture, and revolutionary imagination.

In his free time, he writes and directs his film projects, serves as a screener for film festivals (most recently, the Austin Film Festival), and writes film reviews. His most recent short film Boost: A Stop Motion Story premiered at the Ocean City Film Festival in 2019. He is also the coordinating editor of the University of California Press journal Media+Environment.