This roundtable is part of the Carsey-Wolf Center’s winter 2021 series “Media, Technology, and Politics under Pressure.” “1920/2020” will reflect on the historical and material dimensions of cinematic and public spaces, changes to both after the 1918 influenza pandemic, and the implications of this history for understanding our current time. What is at stake when media become involved in efforts to protect against disease or mechanize comfort? What can we learn from an earlier pandemic about the anxieties of our own time, including fears of crowds, enclosed spaces, and social interactions?

Panelists have created a file of common readings in preparation for this discussion, which is available here. Audience members are invited to review these documents in advance if they choose. 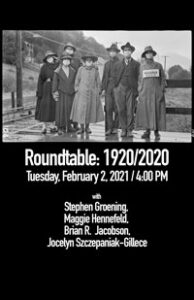 Stephen Groening is an Associate Professor of Cinema and Media Studies at the University of Washington. He is the author of Cinema Beyond Territory: Inflight Entertainment and Atmospheres of Globalization, which traces the history of cinema in airplanes and argues that cinema and aviation work in concert as instruments of globalization. He has written articles on cinematic exhibition, mobile media, and the confluence of transportation and entertainment technologies in academic journals across disciplines of film studies, media studies, and the history of technology. He is currently working on book project regarding television’s influence on postwar cultural theory and philosophy.

Maggie Hennefeld is Associate Professor of Cultural Studies & Comparative Literature and McKnight Presidential Fellow at the University of Minnesota, Twin Cities. Her research focuses on comedy, feminist theory, and silent film history. She is author of the award-winning book, Specters of Slapstick and Silent Film Comediennes (Columbia UP, 2018), co-editor of the journal Cultural Critique, and co-editor of two volumes: Unwatchable (Rutgers UP, 2019) and Abjection Incorporated: Mediating the Politics of Pleasure and Violence (Duke UP, 2020). She is currently co-curating a DVD/Blu-ray set on “Cinema’s First Nasty Women” and writing a second monograph about the history of women who allegedly died from laughing too hard.

Brian Jacobson is Professor of Visual Culture in the Division of the Humanities and Social Sciences at the California Institute of Technology. Jacobson is a historian of modern visual culture and media. His writing about film, art, energy, technology, and the environment has appeared in Cinema Journal, Screen, Film Quarterly, Framework, Film History, Environmental History, History and Technology, Early Popular Visual Culture, and numerous anthologies. He also writes criticism, including essays and reviews in The Atlantic, the Literary Review of Canada, and The Los Angeles Review of Books. Jacobson is the author of Studios Before the System: Architecture, Technology, and the Emergence of Cinematic Space (Columbia University Press, Film & Culture Series, 2015) and the editor of In the Studio: Visual Creation and Its Material Environments (forthcoming, University of California Press, 2020).

Jocelyn Szczepaniak-Gillece is a cultural historian of exhibition, spectatorship, and American film, and the author of The Optical Vacuum: Spectatorship and Modernized American Theatrical Architecture (Oxford University Press, 2018) and co-editor, with Richard Grusin, of Ends of Cinema (University of Minnesota Press, 2020). She is an associate professor of English and Film Studies at the University of Wisconsin-Milwaukee where she teaches courses in media historiography, special effects, animation, and film history.

Patrice Petro is Professor of Film and Media Studies, Dick Wolf Director of the Carsey-Wolf Center, and Presidential Chair in Media Studies. She is the author, editor, and co-editor of thirteen books, including The Routledge Companion to Cinema and Gender (with Kristin Hole, Dijana Jelaca, and E. Ann Kaplan, 2017), Teaching Film (2012), Idols of Modernity: Movie Stars of the 1920s (2010), Rethinking Global Security: Media, Popular Culture, and the “War on Terror” (2006), and Aftershocks of the New: Feminism and Film History (2002).

Media, Technology, and Politics Under Pressure

As part of the Carsey-Wolf Center’s commitment to groundbreaking research in Film and Media Studies, we will sponsor a series of three virtual roundtables in winter 2021 under the rubric “Media, Technology, and Politics under Pressure.” For the other roundtables in this series, please visit this page. Participants will explore the past, present, and future of media in the wake of the anxieties and possibilities of our current moment. A number of key questions will guide our discussions. What possibilities, responsibilities, and obligations gather around film and media study in a historical moment defined by the pressures of racism, the global health pandemic, and subsequent challenges to notions of community, belonging, and purpose? How might we better understand our current time by reflecting on the past, present, and future of media, including cinema, television, and wireless technologies?