This freewheeling conversation will explore the radical visual style, origins, and enduring legacy of the subversive Saturday morning classic television show Pee-wee’s Playhouse (1986-1990). Along with a team of writers, including our guest Bill Steinkellner, actor Paul Reubens developed the Pee-wee Herman character for a live stage show that premiered in 1980. The character would go on to appear in the TV movie The Pee-wee Herman Show and the feature film Pee-wee’s Big Adventure (1985).

Pee-wee’s Playhouse can be streamed on Amazon Prime and Netflix. The panel will focus specifically on season 1, episode 10 “The Cowboy and the Cowntess” and season 2, episode 10 “Pajama Party.” 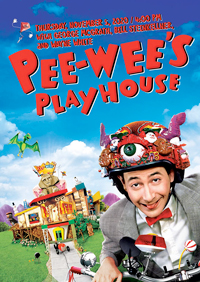 Use the dots above to page through production images provided by George McGrath, or click on the image to open in a new window.

George McGrath began his career as an actor in New York. He performed with the Groundlings in Los Angeles from 1983 to 1992, where he also taught, directed the Sunday Show, and directed and created the long-running Your Very Own TV Show. He was one of the original writers of Pee-wee’s Playhouse and a series regular on that show. He was inducted into the TV Theme Song Hall of Fame for co-writing the series theme song. He co-wrote the Paramount film Big Top Pee-wee, and created and starred in Nick-at-Nite’s first original late night series, On the Television, which he also co-executive produced. He co-starred with Tom Hanks and Sally Field in the feature film Punchline. He wrote Based on an Untrue Story, a FOX TV movie, and had a recurring role on HBO’s Tracey Takes On, a series he also wrote and produced. Other TV appearances include Whose Line is It Anyway? (the London and New York productions). He has received four Emmy nominations for writing Pee-wee’s Playhouse, and for writing and producing Tracey Takes On, a series for which he also won a GLAAD Award. You can watch more of George’s work on his Youtube channel.

Bill Steinkellner was the head writer and co-director of The Pee-wee Herman Show at the Groundlings Theater in 1981. With Paul Reubens, he developed and co-wrote the 2010 Broadway stage revival of The Pee-wee Herman Show. He served as writer and executive producer for Cheers (1985-1992) and Teacher’s Pet (2000-2002). He has been involved with improv comedy as a student, teacher, and director for over fifty years and has taught improvisation and comedy writing at both USC and UCSB.

Wayne White is an American artist, art director, illustrator, and puppeteer. After graduating from Middle Tennessee State University, Wayne traveled to New York City where he worked as an illustrator for the East Village Eye, New York Times, Raw Magazine, and the Village Voice. In 1986, Wayne became a designer for the hit television show Pee-wee’s Playhouse, and his work was awarded with three Emmys. Wayne designed sets and characters for shows such as Shining Time Station, Beakman’s World, Riders In The Sky, and Bill & Willis. He also worked in the music video industry, winning Billboard and MTV Music Video Awards as an art director for groundbreaking music videos including The Smashing Pumpkins’ “Tonight, Tonight” and Peter Gabriel’s “Big Time.” More recently, Wayne has had great success as a fine artist and has created paintings and public works that have been shown all over the world. Wayne’s recent show at Rice University included the world’s largest George Jones puppet head for a piece called “Big Lectric Fan To Keep Me Cool While I Sleep.”

Cheri Steinkellner has earned four Emmy awards, two Golden Globes, a Writers Guild, People’s Choice, World Animation, and British Academy Award for writing and producing TV’s Cheers and creating Disney’s Teacher’s Pet; as well as receiving a Tony nomination for writing Broadway’s Sister Act the Musical with husband Bill. Cheri lectures worldwide and teaches writing for screens and stage at Stanford and at UCSB, where she and Bill were honored to receive the 2017 Inspiration Award.