Written and directed by Isabel Sandoval, Lingua Franca (2019) follows an undocumented Filipina trans woman, Olivia (Isabel Sandoval), after she has secured a job as a live-in caregiver for Olga (Lynn Cohen), an elderly Russian woman who lives in Brooklyn’s Brighton Beach neighborhood. Olivia’s main priority is to secure a green card to stay in America. But when she unexpectedly becomes romantically involved with Olga’s adult grandson Alex (Eamon Farren), issues around identity, civil rights and immigration threaten her very existence.

Director/writer/actress/editor Isabel Sandoval joined moderator Miguel Penabella (Film and Media Studies, UCSB) for a discussion of this fascinating film. This event did not include a screening. Lingua Franca can be streamed on Netflix. 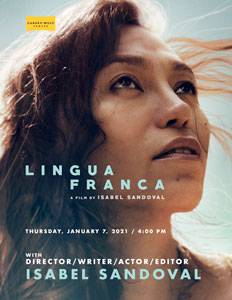 Director, actress, writer, producer, and editor Isabel Sandoval is a Filipina filmmaker who made history at the 2019 Venice International Film Festival’s Giornate degli Autori section with the first film directed by and starring a trans woman of color ever to screen in competition. Lingua Franca is Ms. Sandoval’s first feature filmed in the U.S. and her third feature as director. Ms. Sandoval made her directorial debut with the noir-inflected Señorita, which premiered in competition at the Locarno Film Festival and earned her the Emerging Director Award at the Asian American International Film Festival. Her second feature as director was the Ferdinand Marcos-era nun drama Apparition, which won the Lotus Audience Award at the Deauville Asian Film Festival following its world premiere at the Busan International Film Festival. MoMA’s Department of Film featured Apparition in its survey of new-wave Philippine filmmaking as part of the “A New Golden Age: Contemporary Philippine Cinema” series.

Isabel Sandoval is a graduate from the University of San Carlos in Cebu, Philippines, earned her MBA from NYU Stern School of Business, and currently lives in New York.

Miguel Penabella is a PhD student in Film and Media Studies at the University of California, Santa Barbara. His research deploys the specter as a theoretical framework for examining historical revisionism and questions of national cinema in the Philippines. He is also interested in theorizations of cinematic temporality with regards to national identity, memory, spectatorship, and slowness, focusing specifically on Southeast Asian filmmakers. He is a member of the Media Fields Journal editorial collective.