Premiering in the summer of 2000, Survivor immediately became a national sensation. As viewers anxiously anticipated the crowning of the “Sole Survivor,” the groundbreaking reality series dominated the pop culture conversation. The show soon came to define water-cooler television, as each week delivered fresh events from the island where sixteen Americans had been stranded and left to fend for themselves.

After receiving over 51 million viewers in its first finale and averaging 30 million viewers a week during its second season (regularly topping the juggernaut Friends in viewership), Survivor would eventually blend quietly into the reality television landscape. However, the show continues to draw a consistent audience even in its fortieth season, which aired this past spring. This conversation examines Survivor as both reality TV innovator and legacy franchise now preparing to enter its third decade on the air. Although often dismissed as disposable one-dimensional programming, or else met with shock that the show is “still on,” Survivor’s remarkable legacy and dynamic evolution across forty seasons invites us to consider how our culture has produced and positioned reality television over the past twenty years. 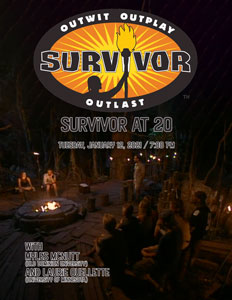 Myles McNutt is Assistant Professor in Communication & Theatre Arts at Old Dominion University, where he teaches and studies on the media industries, with a focus on television. He is also a cultural critic whose writing has appeared at The A.V. Club, Slate, The Washington Post, and his personal blog, Cultural Learnings.

Jeremy Moore is a PhD Candidate in the Department of Film and Media Studies at the University of California, Santa Barbara. His current dissertation work examines on-screen labor, spectacle, and kayfabe in professional wrestling and reality television. His other research interests include video cultures, analog games, and television history.